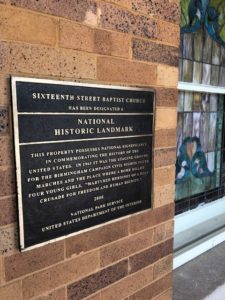 This weekend I traveled with a group of ladies to visit the 16th Street Baptist Church in Birmingham, Alabama. The church is a national landmark because of its centralized role as a gathering spot during the civil rights movement and for the suffering that occurred September 15, 1963 when the church was bombed. As church members prepared for an 11 a.m. service that Sunday, sticks of dynamite placed in a stairwell outside the window of the church basement exploded, killing 4 young girls and destroying much of the church.

After taking a guided tour in the lower level of the church building, our group was taken to the church sanctuary to continue to hear more about what happened on that tragic day. Among many things, we heard the story of the Wales Window.

THIS article matches what we heard in the tour. In Wales, over four thousand miles away across the Atlantic Ocean, John Petts, an artist known for his engravings and stained glass, read about the tragedy in his morning newspaper and offered his services to create and install a replacement window for the front of the 16th Street Baptist Church. 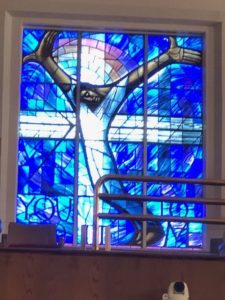 Petts’ depiction of a black Christ is recognized throughout the world as one of the Civil Rights Movement’s most iconic pieces of art. The right hand is said to be pushing away hatred and injustice while the left is offering forgiveness. The lines of dark spots through the center line represent bullets, the swirls in the blue glass represent water from fire hoses, and an overarching rainbow, represents diversity. Petts accompanied the image with the words “You do it to me”, based on a verse from Mathew 25:40: “Truly, I say to you, as you did it to one of the least of these my brothers, you did it to me.” 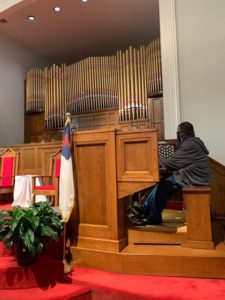 Directly after the tour, we met with Carolyn Maull McKinstry for two glorious hours. She was a participant in the Civil Rights struggle and an eyewitness to the bombing. As a young girl working in the church library that fateful morning, she answered the phone to hear a man say, “You have three minutes,” before he hung up. Her young ears didn’t recognize his words as a warning for a bomb. She had just reached the first pew in the sanctuary when the explosion occurred and some of her friends were killed and many were injured. All were traumatized and became a part of history.

Our trip was a culmination of a book study on Weep With Me. I had done the study independently last year, but went through it again with a group this spring. The last chapter encourages readers to write a lament over the history of blacks in America. I read my lament on the last day of the tour to group members and share it again HERE. A lament includes weeping and wailing in deep remorse. Many of the Psalms are in a lament format. 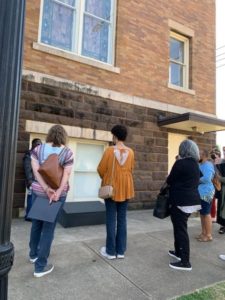 “Rejoice with those who rejoice, weep with those who weep.” (Romans 12:15) I left Birmingham thinking it would be appropriate for this window to also be called the Wails Window. The world has heard the wailing of suffering people, and God has heard the raw sounds of pain, too. Though I still have many questions and know so little, learning from my black sisters in Christ what life has been like for them and their parents and grandparents has made me more empathetic. Not a minute has been wasted.

I have been surprised.

One of the surprising things I have learned is how often my black friends say, “It’s okay,” or “That’s the way it is,” as they shrug their shoulders. I went on this Weep With Me journey thinking the white participants were the ones most needing to process the pain of black people in order to better understand our country’s history. I have since learned that my black sisters are only beginning to process the pain too.

I also learned this weekend that black families tended not to talk about emotions, much like white families in the 50’s and 60’s. Anyone my age is familiar with statements like, “What happens in this house, stays in this house,” and our culture at-large encourages us to “suck it up” and “be strong” and “move on.” The Monday morning after the church was bombed, Carolyn was back in school. There were no grief counselors. Life just went on.

But life didn’t go on. 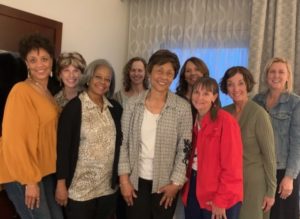 Hearts have been numbed. Coping mechanisms have been developed. Pain has been suppressed. And as bad as that sounds at first, in one way this is not bad news.

Whites and blacks can process history together on the path toward racial unity.

Picture Explanation: The church plaque; the Wales Window; a pipe organ; the site where the bomb imploded; our group surrounding our amazing speaker and author.