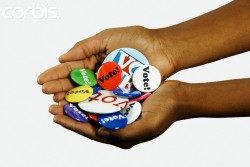 This Easter, I am sending out a short thought about each day of this holy weekend:

I have asked God to make this weekend meaningful for me spiritually and hope to lend some assistance in making your Easter weekend spiritually meaningful as well.

As our country prepares to select candidates for our next presidential election, Americans are abuzz with talk about our next leadership options. I hear tones of hope from some people. From others I hear fear as they face a set of voting options, none of which they like.

And I ask, where is God in all of this?

On this Good Friday I am assured that He never loses sovereign control over history. And for those feeling angry, discouraged or fearful in this election process, let’s look at Pilate on this historic Friday.

in order to please a crowd.

So when Pilate saw that he was gaining nothing, but rather that a riot was beginning, he took water and washed his hands before the crowd, saying, “I am innocent of this man’s blood; see to it yourselves.”…and having scourged Jesus, delivered him to be crucified. (Matthew 27: 25)

And Pilate said, “Why, what evil has he done?” But they shouted all the more, “Crucify him.” So Pilate, wishing to satisfy the crowd, released Barabbas, and having scourged Jesus, he delivered him to be crucified.(Mark 15: 15)

I have found in him no guilt deserving death. I  will therefore punish and release him.” But they were urgent, demanding with loud cries that he should be crucified. And their voices prevailed. So Pilate decided that their demand should be granted. (Luke 23:22, 23)

He [Pilate] said to the Jews, “Behold your King!” They cried out, “Away with him, away with him, crucify him!” Pilate said to them, “Shall I crucify your King?” The chief priests answered, “We have no king but Caesar.” So he delivered him over to them to be crucified. (John 19: 14-16)

A weak leader indeed. A crowd-pleaser. A leader who thought he could somehow wash his hands (literally) and not be held responsible for decisions he made.

And all the while, God had not lost control over one detail.

Our Savior was headed toward paying the price for our sins. Though Pilate was weak, God’s perfect plan for our salvation was unfolding perfectly.

Nothing was going wrong…not really.

We will all cast our votes for the next president of the United States. If a leader is chosen that we view as weak, then rest assured God hasn’t lost one iota of control over His over-arching story for our history.

That is a voting outcome that should concern us far more.

This Good Friday I am grateful for the proof that earthly leaders do not stop God’s story.