Summer Refreshment Series – You are a Firework

Summer Refreshment Series* – Live ABOVE the Chaos – You are a Firework in God’s Story.

As our nation celebrates Independence Day, be encouraged today that you too are part of the light show God is exhibiting every day through His children who are the light of the world (Matthew 5:16). Join me in an excerpt from Live ABOVE the Chaos to discuss the truth about YOU.

A friend invited a group of us to view fireworks at a private club. We loaded up towels and refreshments and made ourselves comfortable in a pristine golf course setting. Darkness fell upon the summer scene, and the fireworks display began. Because of the small crowd and safe environment for my children, I relaxed and enjoyed the beauty of the night sky more than I had in over a decade. The combination of arrangement, color, and types of fireworks was stunningly beautiful against the pitch black canopy above. 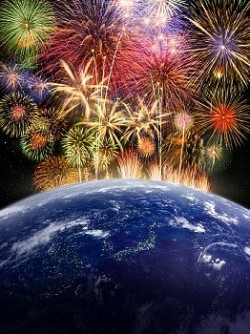 My heart began to physically ache with longing as I watched the splendor exploding above my head. I found myself praying, actually begging for God to use me as a light for Him once again. An  understanding exploded within my own heart that remains with me to this day. The parallel is obvious, I know, but it wasn’t until that 4th of July that my heart grabbed this truth and held on: God is using Christians to make a light show that displays His splendor against the backdrop of a dark world.

Each firework that evening had a different personality. I remember some that gently exploded high in the sky into giant powder puff shapes, but then quietly produced another layer of smaller puffs that cascaded softly from the first ones. At one point I distinctly remember the outline of a blue star in the lower left-hand corner of the sky. It was soundless, short and sweet, but I remember it. Whoever  designed that show had considered the individual characteristics of each firework and launched each one at just the right time and in just the right place for the optimum beauty of the show as a whole.

There are currently 196 countries in the world, and the earth’s population today is over seven billion people. Christians around the globe are firing off their individual lights for Christ as I write these words, and I have no way of knowing what it looks like to God as He looks down from a heavenly vantage point. I can only trust my holy and loving God, the firework arranger, to create a show that in its entirety is perfect and magnificent.

For the first time in my life that night, I didn’t want to be anyone else in the universe. I suddenly understood that God had launched me into history at just the right time (my birthday) and in just 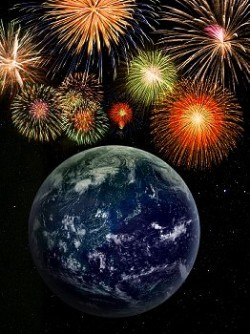 the right place (my address) as part of His exquisite “light show.” For the first time I didn’t want to trade places with people I admire—my personal heroes of faith. Though their “lights” are magnificent, I comprehended that God’s light show would be changed without my light placed in the dark sky. Since God’s firework plans are both perfect and perfectly executed, any changes interfering with God’s design would make history less perfect, less brilliant.

Mother Teresa had a similar view about her role in history; she saw herself as part of the whole. She frequently spoke of her work as “just a drop in the ocean.” About which she explained, “But if that drop was not in the ocean, I think the ocean would be less.” That night under the stars, I got it. If I tried to emulate anyone else’s light or path, there would be a hole where I was supposed to have fired in history.

*Summer Refreshment Series runs from June 10-August 12. Each week, this series will provide an excerpt from Live ABOVE the Chaos, selected specifically to encourage you in the heat of your summer months.

Picture Explanation: When we read verses like, “You are the light of the world,” (Matthew 5:14) this is what Jesus was talking about. He was talking to us when He said, “you.” As believers in Christ, we are the light show! As each of us lives in such a way as to display His glory, we shine brightly and attractively. Together, we can be magnificent. Let’s live in such a way.