Lesson from a Shopping Cart

I parked my car at the mall on a Friday morning. I had arrived an hour early to take a Zoom call from my phone prior to my scheduled hair appointment right when the mall opened. It had rained on and off on my travels in, and the skies remained gray and threatening. Strong gusts of wind suggested more rain was imminent.

Something red caught my eye. 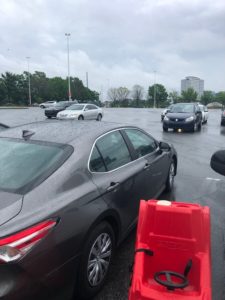 A large red shopping cart was careening across the vast asphalt — pushed by wind. There was nothing I could do. I had looked up too late, and the cart was coming too fast.

Would it miss me?

The cart first hit the right rear bumper of the white pickup parked next to me before bumping back and forth between my car and the truck before finally coming to a stop next to the right front tire of the truck.

What were the chances?

All that empty space and the cart came right between our two parked vehicles. I got out of the car to assess the damage. As expected, the cart had left its mark on the truck’s bumper. As I ran my hand across the side of my car, there appeared to be no damage, which was amazing. Perhaps the rain on my car had made the sides slick enough for the cart to slide off. Or perhaps the first hit on the truck had slowed the cart down enough that subsequent bumps against the truck and my car did no further damage.

I first left a note for the truck driver about the damage done to the bumper. As I began to lift the cart up over the curb to return it to its proper place in the mall, I was stunned at how heavy it was! No wonder it had dented a truck bumper, and it was a miracle there was no other visible damage to either vehicle.

I pondered that cart all day long. 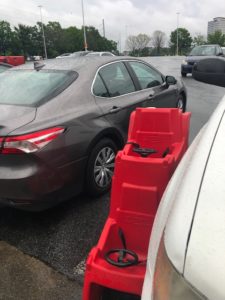 Truthfully, it’s been a few weeks now, and I am still pondering the cart incident. What seems plausible is that a very tired mom pushed her kids up an incline to her car. After placing her kids in the car, she was faced with the decision to leave them alone in the car on a hot day while the cart was returned, or leave the cart there for someone to retrieve later. Who knows whether she saw the wheel brakes. Perhaps she set them, and the wind later set those brakes free.

I am not faulting a tired momma.

What I am highlighting is that she has no idea what the consequences of that decision caused on two car owners the next morning. Her decision – though understandable – caused damage she will never see.

There are consequences to every single thing we do. Somehow it all matters. The world often calls it karma, but I think we are simply watching Galatians 6:7 in action: Do not be deceived, God is not mocked; for whatever a man sows, this he will also reap.

How often have I left a cart for someone else to deal with?

“Oh, it doesn’t matter,” I think, as I speak too harshly to my son. It was just a stray sentence, and I am too hot and tired to apologize right now.

Ouch! (The words stung, and are recalled the next morning when he wakes up. Great way to start the day.)

“Oh, it doesn’t matter,” as I text a reactive response instead of a thoughtful one. “They will understand.”

Ding! (The text hits harshly. The recipient thinks about it for hours.)

“Oh, it doesn’t matter that I don’t call her back.”

Boom! (The person wonders if you are mad at her because you always call her back. It kind of bothers her until you talk next.)

“Oh, it doesn’t matter that I cancel. I know I made a commitment, but I am too tired to go.”

Slam! (Your absence is noticed. The next time you make a promise it won’t mean as much. Now people start to “wait and see.”)

“Oh, it doesn’t matter that I don’t go over there to say hello. Too much trouble today.”

Bam! (Your friend knows you saw her but didn’t say hello. She wonders if she did something to upset you, or she thinks you are rude.)

Dented! (Your friend entered a situation with less spiritual protection than needed because you didn’t follow through.) 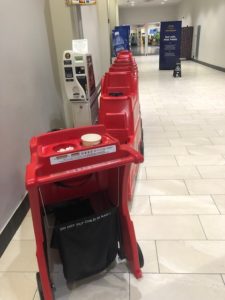 I cringe to think of all the careening “shopping carts” I have left behind for someone else to take care of because I was too tired, irritated or lazy. The parked cart looks innocent enough when we leave it parked and go on with our day — until a gust of life comes along and sends it on its way to inconvenience people, tangle thoughts, fuel misconceptions and do damage we will probably never know about.

But we were the cause.

Yes, we are all members of limited humanity. We make mistakes unknowingly every day and we can’t stop all of those carts from damaging other people. However, what about those nudges we get to do it right, say it right, be careful and slow down?

Let’s listen to those nudges.

In so doing, we will lessen the damage that appears in our wake. Though we don’t always see the damage, it is connected to us in ways that end up mattering.

Picture Explanation: As grills turn on tomorrow and burgers and dogs are flipped, and as families gather on lawns and organize corn hole tournaments, let us not forget to thank God for those that died serving our country on this Memorial Day of 2022.